My deep-dive into how art can make an impact in Indian cityscapes coincided with recent Pune Street Art Project and Pune Biennale. T C Chang (meet the researcher) presented his discourse on public art. He was introducing it as part of Pune Biennale’s event (supported by the Pune Municipal Corporation); Public Space and Aesthetics: Heritage In Continuous Motion.

In his discourse, he made us look at public art from these three perspectives: publicness, artfulness and creativeness with examples from Singapore. And, I decided to pick examples from Pune to reflect on these standpoints. There are many public art displays from the times of colonial times or even the modern ones; mostly influenced by the heritage, events and men of the historical times and, of course, the latest art projects.  Chang also expressed that Art must tell history of people and while I was looking for examples in Pune – some of them, in fact, were showing people’s history in different times. Some do narrate a story in the local context and some don’t do that anymore since context has changed quite a bit.

This study makes me further argue that public art should also evoke response – it should be challenging, reminder of the society and not just decorative, personal expression.

State or private institutes commission the public art installations as a mark of recognition, part of cleanliness drive or to engage people politically or to keep the society in touch with past/heritage. It is not done exactly for aesthetically motivating people towards anything.  Look at the example of the musical instruments, with music in the background, at Model Colony crossroad. It is commissioned by the State municipal corporation, the local MNS (political party)’s contribution, which is announced so big and bold on it.

Another example is the ‘books and graduation symbol’ installation near the educational institutes which mark Pune as ‘la maison officiel’ of education in India, or even the high-relief sculptures of Shivaji in many parts of the city, sometimes narrating the incidents of his life. Some of the famous works done by Veteran sculptor DinkarThopte at Junnar, project funded by the Public Works Department (PWD) of the Maharashtra government  are representatives of the publicness of the public art.

“… these elements of public art help me recognise a city, they act as navigational tools. When I come from my village, and I see these masterpieces like the Jhansi ki Rani Putala, I know that Balgandharva  Rangamandir is coming. It tells me that I am arriving in Pune even from my childhood, now it helps me to navigate in Pune. It tells me as a novice in this city, what Pune is about.”  – lady from Ahmednagar living in Pune since last ten years.

“…the pen sculpture on SB road indicates that there is a college or an educational  hub, nearby, like even the  Alliance Francaise or Patrakar Bhavan. Unfortunately, no one notices it. We have so less street aesthetics, that culture is not there. Artists should come together and see how they can contribute to the city even contribute to social messaging. Slogans on the walls don’t help, how much can one read, it has to be visual.. Visuals stay in mind longer..” a local artist in Pune says…

When Chang showed images of Singapore public art to describe the artfulness, he mentioned that, in this case, public art is more accessible, easy to understand and invites interaction. I also felt artfulness has to do a lot with the story of the artist as well. He describes artfulness as being compliant, someone is depicting a feeling or wants to evoke a feeling.

From Chang’s discourse on graffiti done in two youth spaces in Singapore, he reports what a local artist said to him, 12th sep 2014, “When I hear the word graffiti, I really think more about the street.. the artists uses the city as a medium, a source of inspiration.. the artist works with it. It is not a passive blank surface. Once you try to designate a public space for it, to be beautified, there is no intervention [by the artists] and you fall right into the agenda of another person’s design of the space….” 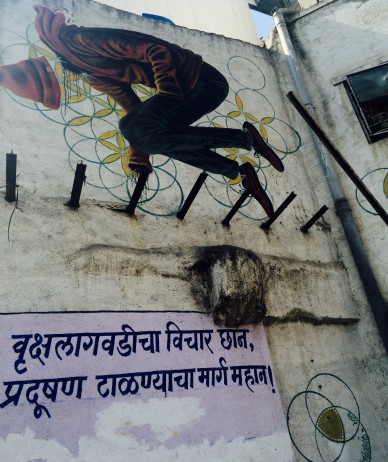 He raised some interesting questions;

What about a particular sculpture that will make it more contextual and involving with the public? Does this art [the sculpture he showed] belongs to just ‘anywhere’? Are we questioning the intention enough and, in fact, are we challenging art enough?

During the recent street art festival in Pune, I asked people about the art they saw on the street walls. Most identified as either done by a Russian or an Australian or some foreigner. Some had talked to the artist when they were doing such art and expressed that they felt amazed to see them doing all that all by themselves. It was interesting to see what people had to say about Indian vs. Foreign artist are doing it. Also, when I asked a boy living in the neighbourhood, what has the artist draw, all the boys with him said it must be either their king or some form of a supernatural being.

No one could relate to it as being of their culture. One brave boy went ahead and said “If you want to paint here, you can paint some bikes, there are big time bikers living in this neighbourhood. Though everyone wanted it to stay as long as possible and wished, that rain shouldn’t really spoil it. Street art being thought-provoking, are most often on the walls of commercial, residential buildings or mostly those buildings that are either ruins or will be ruins soon.

Some more examples of installation from Mumbai street art as reported in this article: Public space, public art?, in this the reporter discusses interesting questions with the artists. If a person walking on the road, are on the familiar ground or not or even understand what the artist is trying to convey.

It is over time that the local get familiar with the public art.

Other wonderful street art projects that are sprung up in other parts of India, in Mumbai; as Mumbai Street Art, the wall project and st-art project in Delhi. After all life is about expressions…

One of the Singaporean sculptors nicely highlights as told to Chang, “Public art should have read appeal, at least to the majority. This appeal does not necessarily mean acceptability. It would rather stimulate awareness of another kind of  language; a three-dimensional sensory vocabulary  to read works considered art…. and so on.”

Creativeness of public art is for the instrumental purpose. Generally done by local artists, encouraged by the state. Creative, cohesive community is working together to create a city, even projecting a progressive city. Therefore, giving an identity to it.

Community Art informs and is engaging the public to participate, kids, schools, and people of all ages. They decide the themes that they would like to depict on the walls. 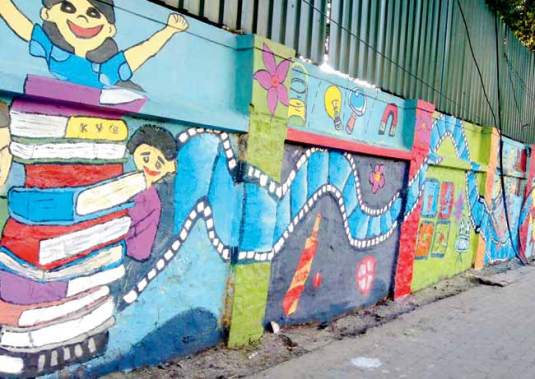 Chang also pointed out examples of community art in residential spaces, quoting one of the members of parliament there,

One of the workers in the water works department in Pune mentions his opinion, when i asked him what does he suggest if I had to paint on the wall outside on the street, to which he replies “something that is visually engaging message, …don’t make any more historical figures. Everyone knows about Shivaji, those kings and rulers are in heritage places, in our books. Make something more relevant to the present, something from the daily lives… 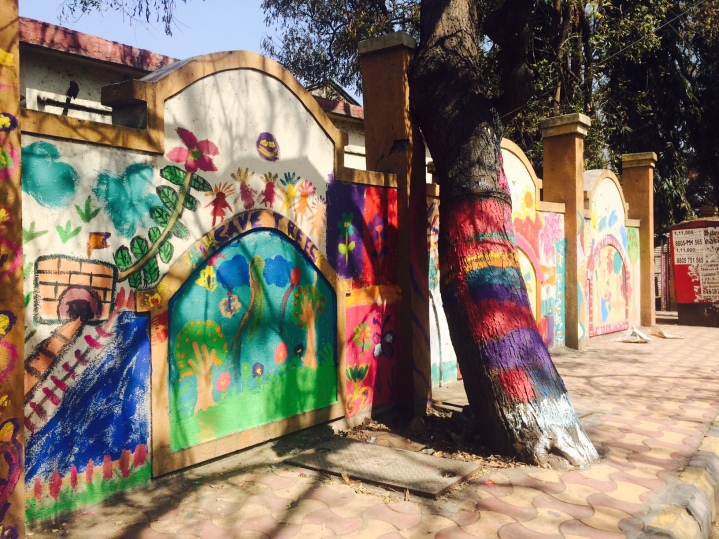 … something that talks about today’s’ issues – like respect women seeing the rape scene in India. I like what kids made today [part of Pune Biennale], it shows their expression; save trees or also plant more trees.”

Other examples in Pune are the recent student efforts where they have tried to bring up societal issues. I also just love the efforts of Ugly Indians as all of the work is done by the citizens themselves.

Also, another great example of Aids awareness campaign in KP, in which artist makes use of art to convey and inform people. However, if you see the hoarding just above it: that hoarding is a complete distraction, other than a boring advertisement. This has not been thought looking at the urban space as a whole and does nothing to add to the already existing aesthetics of the place, instead of just adding a meaningless piece there.

In another great graffiti art, which I stumbled upon Shilo Shiv Suleman’s work. She is an Indian visual artist, the artist has worked with local artisans and kids in her The Fearless Graffiti Project- Bahuchara and Ahmedabad . She affirms: ‘I am more than my body’ on a fearless story of  Bahuchara Mata, goddess of Gujarat.

Public art might have to think of all of this: publicness, artfulness, and creativeness. Today, street art can go beyond the expression of an artist, into its relationship with its people, with the life around and evoke a reaction from the society.

One thought on “Public Art and Street Aesthetics”